Skip to content
Posted on February 26, 2018 by Kirsten Ainley

Mario Gomez is the Executive Director at the International Centre for Ethnic Studies (ICES) in Sri Lanka. He has published in the areas of human rights, constitutional reform, public law, gender equality, and transitional justice. He has a PhD in Law and teaches at the University of Colombo on public law, human rights, and gender studies.

Dareen Khalifa is the deputy director of The Day After Association and holds an MA in Human Rights and Public Policy from UCL in London. She has contributed to several human rights reports, including the Global Integrity Anti-Corruption report on Egypt and the Verité International Annual Report on Labor Rights; and has published on a revision of the peace treaty between Egypt and Israel as well as on local reconciliation agreements in Syria.

Nelson Camilo Sanchez is a research coordinator of the Center for the Study of Law, Justice, and Society – Dejusticia – and associate professor at the ‘Universidad Nacional de Colombia’ in Bogota. His research and publications focus on transitional justice, human rights, armed conflict, social justice, development and economic, social and cultural rights, and he has done a close follow up of the peace talks with a special focus on land restitution.

This post is authored by the network members above to reflect on the work of the Justice, Conflict and Development Network, following the first three workshops in Colombia, Uganda, and Sri Lanka. The photographs were taken by network members during the workshops.

What is the network looking to achieve?

The network has been looking at connections between justice, conflict, and development by focusing on four conflict-affected countries: Colombia, Uganda, Sri Lanka, and Syria.

The broad range of knowledge and experience brought by members of the network has allowed the group to map existing research and identify knowledge gaps in three of the four case studies; it has additionally allowed us to foster interdisciplinary engagement through capacity and relationship building, in addition to maintaining virtual engagement through this website and social media. 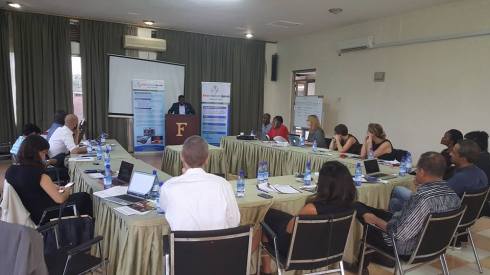 Through field visits, we have been exploring the connections and boundaries between justice and development. Based on the underlying premise that states need to enjoy a condition of durable peace for development to take place, the focus of the network has been to test the impact of justice institutions on development in the four case studies.

What are the most interesting/surprising things you’ve learned through the network to date?

One of the fundamental added values of the field visits conducted by the network to date in each of the three countries, has been to test some of the predominant assumptions that surround justice and development and their correlation, where the expectation that transitional justice, peace, and development all go together has been contested in each of the case studies.

In all of the cases, we have found attempts by civil society to establish a ‘bottom-up’ approach to transitional justice. It is assumed that as long as the repressive regime is still in power, it would be difficult for a comprehensive justice process to take place; however, we have seen that even in situations where the transition has not yet taken place; it is possible to find the implementation of some forms of transitional justice measures. They might be carried out in localized forms, even when the main perpetrators still hold political power. However, due to the imbalance in power relations and the consolidation of power in the hand of authoritarian regimes, it is difficult for victims to achieve some forms of accountability, for example, criminal prosecution. Therefore, there is an empirical need to conduct additional research on local initiatives and the ability of communities to scale up these local initiatives to push for social transformation and transitional justice frameworks.

At the same time, when the regime has not changed, there is a high risk of the misuse and manipulation of the concept of transitional justice in order for the regime to gain legitimacy, divert international pressure, and consolidate power.

Why is research on the connections between justice, conflict, and development necessary?

The cases we have studied have allowed us to analyze how in practice there are many connections between conflict and development. In some cases, local analysts and the communities themselves have indicated how development deficits have had an influence in the emergence of conflicts. Especially in cases where development has been uneven and communities have been excluded and discriminated against. Thus, the cases feed into the discussion that we have seen in theory regarding poverty and exclusion as causes of violent conflict.

In other cases, the political economy of the conflict causes the emergence of economies and forms of development during conflict times that are driven by the warriors’ interests. These economies can be illegal, such as the use of illicit crops in Colombia, or they can also be legal. At the same time, the conflict restricts, de facto, multiple forms of human and economic development. These limitations generally translate into a violation of the economic, social, and cultural rights of the victims and communities, such as the impossibility to attend school for girls and boys, or the almost complete destruction of health infrastructure, as is the case in some regions in Syria.

On the other hand, the end of a conflict gives rise to opportunities for economic development and reactivation that may have taken root while the conflict operated or that take advantage of its absence. This idea of ​​“peace dividends” is very attractive from a social and economic point of view, but it is not always associated with general access to the benefits of such development. In our field visits, we have heard from communities how the post-conflict has influenced the ways in which an area develops. The coastal area of Trincomalee in Sri Lanka is one of them. In Colombia, similarly, we listened to the grievances of the ancestral communities of the Montes de María territories about how the post-conflict brought the extensive cultivation of African oil palm and the consequent scarcity of water for the irrigation of traditional crops.

All these relationships between conflict and visions of development impact the expectations and the meanings of justice, both at the community and the state level. What concept or concepts of justice should these interrelations and protection deficits face? Here, again, the theoretical discussions are best viewed through the lens of the cases and the communities’ expectations and proposals. For example, the leaders fighting for land in the Montes de María in the Colombian Caribbean, spoke of transformative reparations and social justice. Two concepts with which they feel more identified than with other more traditional views of reparations.

In general, these interrelations, based on specific contexts, require further research because the normative assumptions on which many disciplines and methodologies have been based are not sufficient for describing the complexity of current reality. For example, the aforementioned relationship between poverty, exclusion, and the generation of armed conflicts; or, on the other hand, the relationship between economic developments in post-conflict regions where the land use or ownership is radically modified.