Dr Mark Kersten is a Fellow based at the Munk School of Global Affairs, University of Toronto, and the Deputy Director of the Wayamo Foundation. His research and work focuses on the effects of judicial interventions by the ICC on conflict, peace, and justice process; capacity-building and domestic accountability for international crimes; and the nexus between mass atrocities and transnational organized crimes.

Mette Nielsen is currently based in Nepal as a Peace, Security & Justice Adviser for DFID, focusing on the intersection of politics and justice as it plays out in the transitional justice process as well as facilitating reconciliation as well as justice. She specialises in security and justice with a particular focus on conflict-affected and post-conflict environments, having advised DFID and the UK Government’s Stabilisation Unit on Afghanistan, Burma, Kenya, Nigeria, Occupied Palestinian Territories, Pakistan, South Sudan, Sudan, and Yemen.

Dr Eric Wiebelhaus-Brahm is Assistant Professor in the School of Public Affairs at the University of Arkansas at Little Rock. His research includes work on transitional justice (TJ), human rights, post-conflict reconstruction, and democratization. Particularly, he is interested in the evaluation of TJ mechanisms, the political economy of TJ, and the role of diaspora groups in TJ processes. He currently also works on projects on the Latin American Truth Commission and the funding of TJ processes.

This post is authored by the network members above to reflect on the work of the Justice, Conflict and Development Network, following the first three workshops in Colombia, Uganda, and Sri Lanka. The photographs were taken by network members during the workshops.

Why is research on the connections between justice, conflict and development necessary?

Quite frankly, it is impossible not to look at the connections between justice, conflict, and development when confronted by the realities that face conflict-affected communities. We might take a more narrow focus because that is what the international community asks for. Sometimes, the space and disciplinary boundaries of academic publications are constraining. But to ignore the interconnectivity of these three elements would be to conduct research with a significant blind-spot that belies the challenges — and opportunities — faced by communities emerging from conflict. Justice, conflict, and development processes do not occur in neat and tidy silos. These processes are messy and interwoven with each other. Our work as part of this network has made this crystal clear.

Looking at justice, conflict, and development as interrelated pursuits illuminates some of the oft-held assumptions regarding how each of them play out in different ways and across different contexts. For example, transitional justice does not always contribute to the development of the rule of law or to just and peaceful societies that have emerged from conflict. By definition, transitional justice is a temporal activity. As such, it necessarily sets boundaries of inclusion and exclusion that may further injustices against those deemed outside of the process. In Sri Lanka, for example, there are questions about whether the socio-economic injustices experienced by those not deemed victims of violent political conflict are any less deserving of attention from transitional justice processes than those of conflict victims. Should a family displaced by post-conflict urban development be considered a victim of the conflict or do our conceptualizations of justice not allow for such claims? By looking at justice processes and development issues simultaneously, one can see how transitional justice can at times exclude issues pertaining to uneven and exclusionary forms of development. The challenge, then, is to think about justice in conflict-affected areas in ways that are inclusionary to the claims of all those affected — not just one subset. We don’t pretend to have the answers to how to meet this challenge. However, our work as part of this network has made it abundantly clear that we need to reframe the way we approach the inter-connectivity between conflict, development, and justice.

The positive and negative roles of international actors in the context of justice, conflict, and development is something we have also been confronted with in all of the countries we have visited. Sometimes victims feel that conceptions or processes of justice are imposed from the outside, or pushed by a desire to meet international demands rather than to genuinely address victims’ real grievances. In Sri Lanka, the UN Human Rights Council resolution in 2015 was co-sponsored by the Sri Lankan government, some argue, at least in part because of a desire to diversify international policy and trade relations. The preference for certain interpretations of justice does not seem to fully reflect the grievances felt by victims, many of which have experienced harms that are of a socio-economic nature.

Often, justice and development demands vary significantly depending upon one’s socioeconomic class or where one lives in the country. In Colombia, for example, victims’ demands for accountability have led to the widespread and successful use of prosecutions. Land reform, by contrast, which is at the heart of socio-economic inequality and conflict-related injustices, is much more difficult to achieve progress on due to powerful vested economic interests. In all three countries we have visited so far, we have seen significant variation in terms of how different regions of the respective countries have been affected by conflict. The needs of displaced Sri Lankans and Colombians in urban areas are quite different from those in rural areas. Ugandans in the north of the country have different needs from those elsewhere.

Justice means different things to different people and is pursued by different people for different reasons. It is instrumentalised, politicised, and used by different actors for different purposes, sometimes blurring the integrity of the original aims of justice. Problematizing the relationship between justice, conflict, and development helps reveal these complexities. Comparing the experiences of our four research contexts – Uganda, Sri Lanka, Colombia and Syria – is helping us to question assumptions that undermine claims to all three goals and to examine the contribution that justice can (and cannot) make to sustainable peace and development in the wake of conflict.

What are the most interesting/ surprising things you’ve learned through the network to date?

The network is rich in its diversity and brings together experiences and expertise from many different perspectives. Some of us are academics, some civil society activists, and some policy-makers – and of course sometimes these roles overlap. One of our network members is even directly involved in ongoing peace process negotiations. To some extent, we speak different languages because we do very different things but this is also helping us to realise how important it is to have multidisciplinary conversations. For example, one network member passionately argued for the need to involve more economists, thus expanding our conversation and the kinds of actors we speak to.

Amongst the most rewarding experiences is to witness the cross-fertilisation that occurs when people who have directly lived the experiences of conflict and injustices on different continents discuss issues that affect them both. For example, it has been fascinating to witness our Colombian and Ugandan network members sharing their knowledge about the use of amnesties or our Syrian and Ugandan members discussing experiences of displacement. Typically, and far too often, these conversations would occur between international experts who had studied or done fieldwork in both of these countries. To see indigenous experts sharing their knowledge, expressing curiosity about each other’s experiences, and learning from each other is not only rewarding for them but for all of us who are privileged to witness it. This is true not only of network members, but also through the interactions we have had with local academics, activists, and policy makers in the countries we have visited thus far.

We would be remiss if we didn’t mention the personal satisfaction we get out of doing research with such terrific colleagues. We have fun too because we are passionate about similar things and have gotten to know each other socially as well as professionally, resulting not only in camaraderie but also professional collaboration. We’ve travelled together, eaten together and danced together as well as worked together. We’ve entertained each other for hours as we waited on a Ugandan roadside for repairs to our bus. We’ve grieved together over the loss of our dear new friend, Vijay Nagaraj, who sadly passed away six months into our work together. We live and see these things together and have forged a special bond as a result.

Has the network changed the way you approach your work? How?

Every member of the network has examples of how this experience has influenced what we do. One of us is now less skeptical about transitional justice work and another actually more so. One of us has gotten the itch to do more fieldwork in the future. We’ve all learnt about parts of the world we had only superficial knowledge of previously, and can use those real-life examples in our work. It already has, and will continue to, inform our work as scholars and practitioners. Moreover, because of our experiences, our awareness of the intersectionality of conflict, justice, and development has been cemented.

For those of us who teach, it becomes much more powerful when real-life examples inform discussions. We have pictures, video, and stories to share with our students, all of which bring dry academic material to life. One of us who teaches courses on transitional justice and post-conflict reconstruction has revamped major sections of the course to incorporate content specifically from the four countries in our study. We happened to be visiting Kitgum in northern Uganda where a traditional hut had been erected to remember children disappeared in the war just as one of us was discussing memorials in an online class.

For those of us in the policy world, devising policy positions can be done more persuasively when they are informed by a multitude of perspectives. For example, understanding the relationship between the judiciary and the special court in Uganda has helped inform discussions in Nepal on the draft legislation to set up a Special Court. Experiences from Colombia on land restitution is also something that resonates in the Nepal context which may lead to lesson sharing.

Exploring the different ways in which international actors have been involved across these contexts and why in certain contexts they have had a greater footprint than in others. For example, the role of the US and neighbouring countries in Colombia and of international relations in Sri Lanka are in somewhat stark contrast to the more indigenous approaches in northern Uganda.

What further research needs have you identified through the network?

Expanding the conversation is important and doing so beyond the “usual suspects”. The value of different and multi-disciplinary perspectives is unquestionable. To be sure, we are a diverse, multidisciplinary group. However, our experience in the network has led us to believe that we need to engage more economists, political economists, and even professions like urban planners, engineers and architects who have a key role in shaping the post-conflict reality in which victims and survivors — as well as perpetrators — reside. We’ve also discussed the importance of art in healing and some of us have direct experiences with this. In Nepal, for example, street theatre and local art is playing a role in trust building. In Kitgum, Northern Uganda, we learnt that thousands of children are still missing, presumed abducted by the Lord’s Resistance Army, and visited a centre dedicated to their memory and advocating for their safe return. Engaging with those who dedicate their lives to the goals of conflict, justice, and development — through the arts or through committed community centres and museums — is critical in achieving a broader appreciation of the intersectionality of all three. 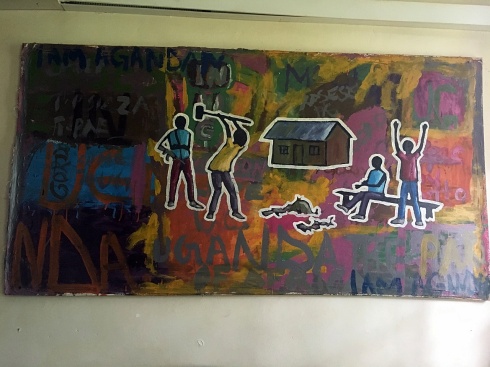